Knowing why makes things crystal-clear in trying times, and acts as a guiding star when there is a problem!

Transformation Innovation Leadership
The key to a great story is not who, what, or when, but why!

Whether it is for theatrical reasons or practical ones, purpose or motive has always been the driving factor of the story. Knowing the Why makes things crystal-clear in trying times. It acts as a guiding star when we are in a problem.

As far as the business context is concerned, not having an answer to this critical question poses a fundamental problem in almost all the change management initiatives. Additionally, when an organization is trying to revamp, go to the next level of excellence or advancement, not knowing this (why — the purpose) becomes a roadblock.

Any suggested change or idea is rejected due to firm beliefs formed by employees over a long period in an organization. “We have always done it this way — why change?” This is a typical argument in the system that is resisting the change of status quo. Only a few would take extra effort and pain to understand the reasons behind it.

There is an exciting story about monkey-experiment, which I find relevant to this topic. The experiment involved five monkeys, a cage, a hand of bananas, a ladder, and a water hose. These five monkeys would be locked in a cage, after which a hand of bananas was placed on a ladder right in the middle of the room. 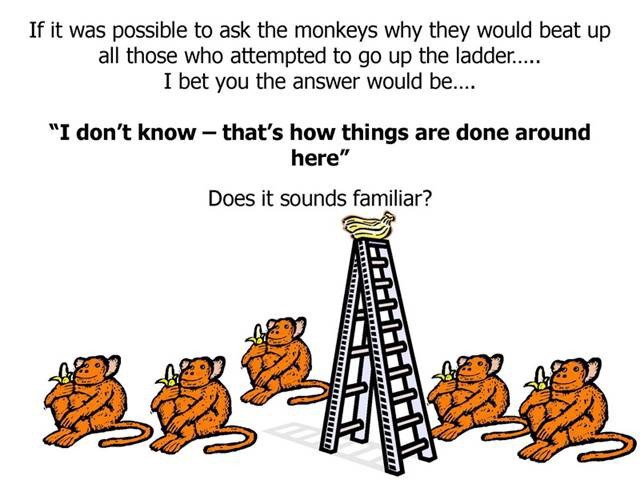 Of course, immediately, one of the monkeys would race towards the ladder, intending to climb it and grab bananas. However, as soon as a monkey would start to jump, the sadist (or so-called ‘scientist’) would spray the monkey with ice-cold water. Also, however, sadist would spray the other four monkeys.

When a second monkey was about to climb the ladder, the sadist would, again, spray the monkey with ice-cold water, and apply the same treatment to its four fellow inmates (!). Likewise, for the third climber, and if they were particularly persistent (or dumb), then the fourth one. Eventually, they would have learned their lesson: they were not going to climb the ladder again — banana or no banana!

To gain further (insightful) pleasure and prolong the experiment, the sadist outside the cage would then replace one of the monkeys with a new one. As can be expected, the new chap would spot the bananas, and think “why don’t these other idiots go get it?” and start climbing the ladder. Then, however, it got interesting: the other four monkeys, familiar with the cold-water treatment, would run towards the new monkey — and beat him up black and blue. The new monkey, blissfully unaware of the cold-water history, would get the message: no ladder climbing in this cage — banana or no banana!

Then the scientist outside the cage would replace a second monkey with a new one; the events would repeat themselves. The new monkey runs towards the ladder; other monkeys beat him up; the new monkey does not attempt to climb again. There would be one notable change though, the first new monkey, who had never received the cold-water treatment himself and didn’t even know anything about it, would, with equal zeal and enthusiasm, join the beating of the new monkey on the block.

When they replace the third monkey, the same thing will happen; likewise, for the fourth one, and eventually, all the monkeys had been replaced, and none of them in the cage had any experience or knowledge of the cold-water treatment.

Then, a new monkey was introduced into the cage. It ran toward the ladder only to be beaten up by the others. But, this monkey turned around and asked, “why do you beat me up when I try to get the bananas?” The other four monkeys stopped, looked at each other slightly puzzled and, finally, shrugged shoulders, “well, we don’t know why. But that’s how we do things around here!”…

It is still debated whether this experiment was carried out or not. However, the point this story is trying to make is — we are conditioned based on the consequences of actions. It then affects both — our likelihood to do it and our reaction to others who are trying to do the same.

The cognitive and behavioral conditioning influences how we perceive the world around us and how we deal with others.

It also explains the importance of our crucial question — why. Over the years, all organizations develop many routines, processes, habits, and practices, also known as organizational culture. These cultures can be remarkably different, in terms of what type of behavior they value and what they do not like to see, and what they reprimand.

Generally, these habits and conventions have been developed over many years. Moreover, quite often, no one remembers why these were started in the first place! Besides, it is more likely that the guy with the water hose, the sadist who troubled these monkeys may have long gone!

And this is why, don’t just beat up the new monkey — whether it is a new employee, a recent acquisition, or a partner. Because their questioning of status quo, “the way we do things around here,” is valid and relevant!

Not only employees but also as leaders in your organization, you should be the first one to ask these questions and challenging the status quo and nurturing the habit of asking why and when appropriate will pay-off in the end. It can develop an ever-growing, improvement culture in your team and the organization.

To begin with, try doing a straightforward experiment for a few weeks — you will discover many new things! Start asking why in an appropriate tone and manner. It is one of the many powerful root-cause-analysis (RCA) techniques called 5-why analysis. See what responses you get, what you find, and what you learn.

Knowing why makes things crystal-clear in trying times, and acts as a guiding star when we are in a problem!